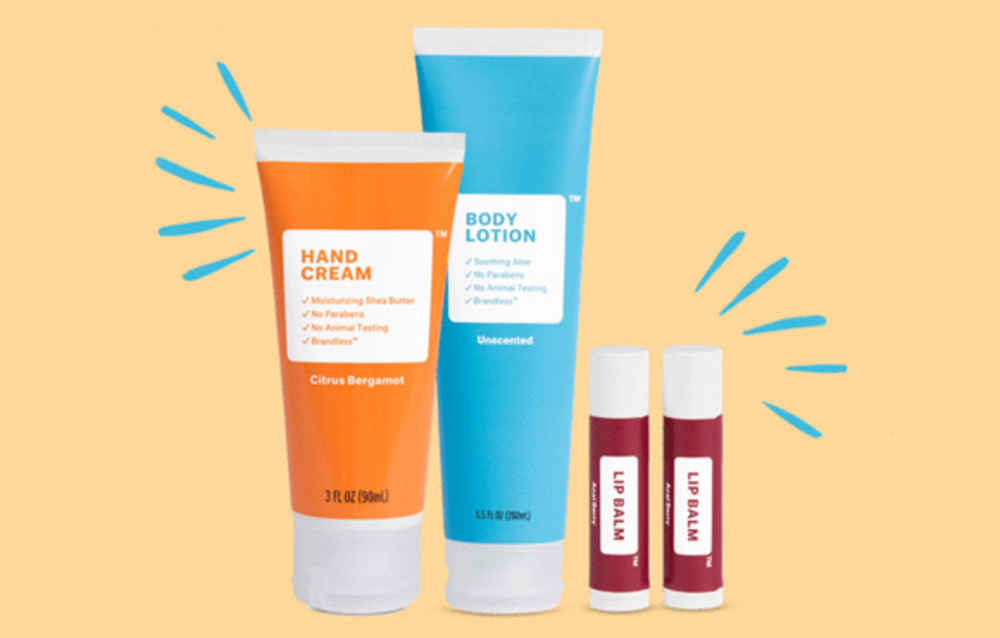 The growing market for healthy, eco-friendly, organic and natural products (as ill-defined as all of those terms are) leads to some curious examples of new products and brands… or shall I say, un-brands?

Brandless, a health-conscious food and household product company, has chosen to eschew a visual brand identity, using a white rectangle with rounded corners and generic typeface as their “logo”… and as the carrier for all product labeling on packaging. The company claims that too many brands assess a “brand tax” on customers—an alleged hidden cost that consumers pay for national brands.

But in their zeal to cut marketing expenses and eliminate this brand tax, the company has run into problems. Their lack of a distinctive visual identity has resulted in a running battle with the U.S. Patent & Trademark Office (USPTO). Brandless attempted to register as a trademark their blank white rectangle with the rounded corners. That’s right—the company wants to register their non-existent visual identity, an empty white box.

The USPTO took particular exception to their inclusion of the “TM” in the design of their trademark application. Brandless claims the TM is an important element; the USPTO says the common law TM symbol is unregisterable.

Given the contradictions inherent in claiming to be brandless but still wanting the legal protections afforded brand logos, I have to wonder if the press coverage of this bureaucratic contretemps will hurt a company claiming to have no interest in branding. And with the clean label trend growing rapidly, this could be an issue for many small CPG companies. Streamlining design until it is essentially invisible may be a great strategy for the first few companies into the market, but then competition rises up. How do minimalist visual identities serve brands in a crowded marketplace?

Unless Brandless can provide evidence that their empty white box has acquired sufficient distinction in use to be recognizable by customers, this is a dead trademark. That means other companies can use the same imagery on their products.

This may not be an argument in favor of brand identity, but it’s a fun conversation for debate over ad agency and design studio happy hour or around the agency watercooler.

Unbranding Is a Thing

Jones Knowles Ritchie/Singapore’s Katie Ewer argued at FastCoDesign that if too many companies opt to just sell the product/ingredients, the loss of convenience and efficiency to consumers may actually steer people back to established brands. Who has the time, she asked, to read ingredient lists of every product in a category? Unbranding ignores how real people shop.

Branding makes choice easier, and helps reduce choice fatigue. Brands are a shortcut for busy shoppers, who mostly just want to order, buy or grab a trusted product and get home to make dinner, feed the pets, race to the next kids’ athletic event or just collapse on the sofa for a good Netflix binge.

Also, Ewer argues, unbranding is still branding—a way to differentiate their products from everyone else’s. Hence, Brandless’ attempt to trademark the un-trademark-able. And isn’t that as dishonest and manipulative as what Brandless claims to be fighting? Brandless purports to represent consumer needs by eliminating a made-up tax, tacking a TM on their non-logo, and pretending this is about something other than carving out a profitable niche. It also ignores that their products may not be that good—something else that a brand guarantees implicitly. How’s that for unbranded transparency?

Brandless’ owners and investors are so certain their tactic will be blithely accepted by the apparently unlimited credulity of the average consumer, that I can only wish them farewell and goodbye. Today’s consumers are better informed, more skeptical and less trusting of brand claims that at any time in the history of marketing. Just reading about Brandless’ claim of differentiation made me do the eyeroll.

I am a brand loyalist. I loathe grocery shopping, because I’ve learned to expect the groceries to have either relocated products whose aisle/shelf locations I used to know automatically; replaced favored brands with store generics; or stopped carrying products in sizes I used to be able to reliably find. Last week I spent a good ten minutes walking from one end of the store to another on a fruitless search for one product on my list. I finally found it, exactly where it normally is… but in a smaller size than I wanted and pushed back behind the store’s generic brand. But I still went home with “my” brand.

That is why brand matters; people like me will still waste ten precious minutes tramping the grocery aisles to find the brand they trust. Unbranding proponents, take note.