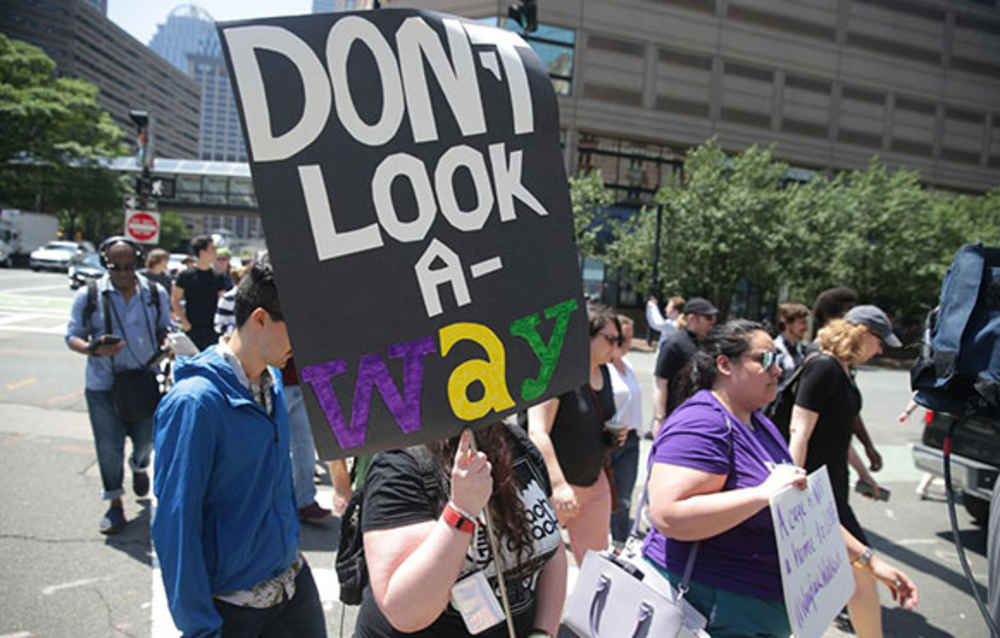 Edelman, the U.S. public relations firm, pursued a new client earlier this spring, looking to change the narrative around a firm in an industry becoming more and more notorious—the for-profit prison firm GEO Group. GEO is one of the private companies involved in running the troubled migrant detention centers along the southern U.S. border.

The PR giant was set to begin work with GEO in July, but instead dropped the account. Edelman employees reacted so negatively to the idea of working with the firm—and some leaders developed belated concerns over their own exposure from association with the detention centers—Edelman announced they would not continue the relationship.

Edelman claims its “strong values” have led to decisions not to work with certain industries, including tobacco, coal and firearms. The GEO Group pitch was led by recent Edelman hire Lindsay Walters, who formerly served as deputy press secretary in the Trump White House. Employees turned to Fishbowl, the professional messaging social platform, to express strong feelings about the client, some terming the relationship “hypocritical” and “a red flag.” Not all employees agreed with ending the relationship, but the media leak forced Edelman to address the issue. When Edelman informed employees they would not after all take the account, employees on Fishbowl said leaders essentially “shame[d] us for ruining the work for the company” and leaking the issue to the press. An Edelman spokesman refuted that report.

Edelman is not alone in dealing with their employees’ growing interest in what sort of clients their employers pursue. Adweekreported Ogilvy had to address employee pushback over their PR division working with U.S. Customs and Border Protection (CBP), a relationship many employees had been unaware of until online investigative news site Sludge exposed the connection. Ogilvy, responding to Adweekabout the story, claimed that their CBP work was solely in recruitment campaigns, not publicity; CBP has had difficulty recruiting since the controversial family separation policy was enacted.

For many employees, the ads and videos in those recruitment campaigns are the proverbial lipstick on a pig, focusing on life stories of individual border agents and speaking about “compassion,” while never mentioning CBP’s role in the detention centers and camps now the focus of non-stop media attention. An earlier recruitment campaign by Accenture was more hardcore, with agents in military-style camouflage and battle gear protecting “more than a line on the map.” Neither campaign greatly improved recruiting, per a number of in-government news sites.

Ogilvy works with several government domestic agencies, all of which have strict confidentiality clauses for marketing partners, so they tried to keep the issue in-house out of fear that public discussions could jeopardize other government relationships. Employee discussions, again on Fishbowl, exposed the problem. Employees even ran a Fishbowl survey asking how the CBP relationship might affect employees’ decisions to stay at Ogilvy; the results were not made public. One can’t blame employees for being surprised by the CBP work; Ogilvy did a 2017 pro bono campaign, “One Chicago,” promoting Chicago’s “sanctuary city” status. Ogilvy seems to be trying to have its cake and eat it too.

Elsewhere, The New York Times reported Deloitte and McKinsey employees pressured their firms over contracts with Immigration and Customs Enforcement (ICE). Both firms confirmed to Adweek they are not presently working with CBP; they did not specifically mention ICE, again possibly due to confidentiality requirements. Others firms, including Amazon and Microsoft, have faced employee protests over ICE contracts, and Google was forced to review and revise its government work when employees protested their working to improve AI in military drones.

The huge sums from federal contracts—reportedly Accenture’s contract was for $297 million, and Ogilvy is estimated to potentially earn some $39,039,225 million if they continue to 2021—are why the results of employee-led rebellion are so interesting. Big global firms, with their hundreds of thousands of employees, have a lot of overhead to cover, so lucrative government contracts are alluring. But marketing and PR firms are finding client selection with no attention to employee values or political views can create their own morale, recruitment and retention issues. That increasingly means taking a client just because the money is good is no longer a no brainer.

Client conflict used to refer to taking two clients who were competitive or within the same industry. Today, conflict is as likely to arise from values clashes between client actions/perceptions, and the internal values claimed by the marketing firms. Employee expectations have evolved. People are now holding their employers to higher standards, and are outspoken when they perceive company actions are out of alignment with claimed values. Diversity initiatives in the not-very-diverse marketing industry further complicate government work, given the current administration’s making race and immigration hot-button topics. These matter especially to younger employees, who tend to be more activist in their political views, supporters of diversity, and hold strong feelings about working at companies whose values align with their own.

Smaller agencies may have more control over the selection and pursuit of their prospects and client relationships. Today’s employees hope to make a positive impact on the world, and you can expect negative reactions to “evil” client relationships. You should certainly be aware of how employees feel when building a new business list that considers values alignment as one criterion for pursuit. Involve employees in developing new business criteria, recommending prospects/leads, and pursuing accounts for which the entire agency can be happy to work. Don’t wait until the pitch is in progress to make sure employees are on board.

Walking a Brand Tightrope: Be True to Your Values

How Real Are Your Agency Values?