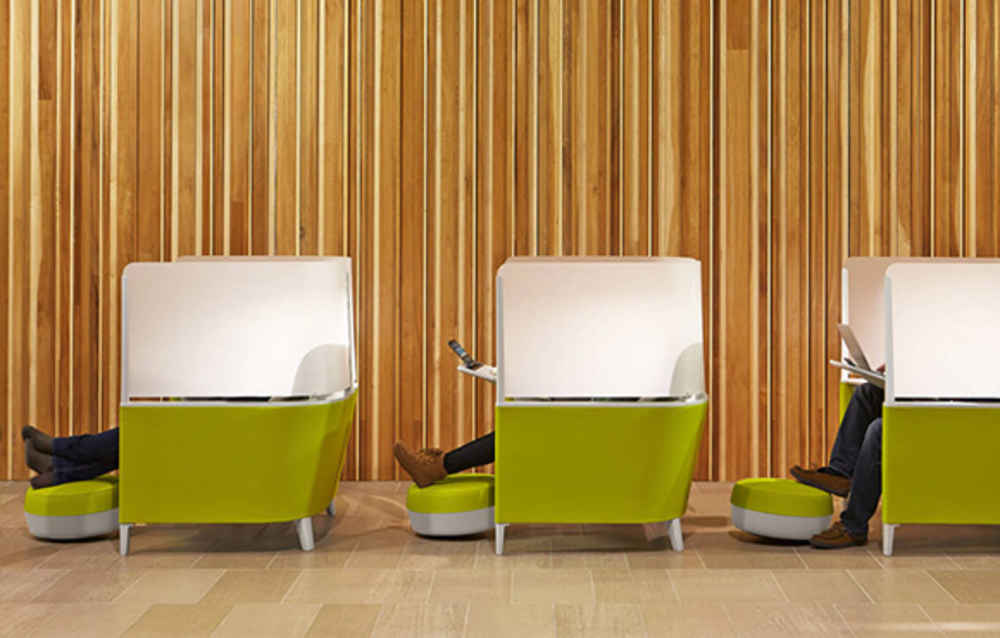 Modular workspace company Room surveyed 4,000 workers and arrived at new findings about open workspaces: employees love to hate them. Aside from the obvious lack of privacy and greater potential for interruption, there are issues of noise levels, temperature control, inescapable smells, and being forced to talk to people you may not want to talk to. People even listed multiple things they would give up just to have a private workspace, including vacation days, end-of-year bonuses, access to a window or natural light, and an office coffee machine. And a Reddit thread about surviving an open-plan office listed a myriad number of passive-aggressive hacks to use to reduce interruptions, manager surveillance and ambient noise. Some commenters said open plan workspace would be a deal-breaker when considering a new job.

Yet many companies love open workspaces anyway, and keep building them. Why are company leaders so enthralled by open plan spaces when increasing data indicates they result in lower productivity, less collaboration, employee job satisfaction and subjective well-being, and even sexism? Because, reports Fast Company, open-plan spaces are supposedly cheaper than offices with walls.

But lower cost is a myth, reports The Drawing Board: while building and partition costs may be reduced, eventually lower productivity will be felt, and that can quickly become very expensive to a company’s bottom line. The other big reason companies like open plan workspace? They can watch their employees more easily. And indeed, many people stuck working in open-plan spaces feel like they are constantly under surveillance—if not by employers, then by every person who chances to pass by your un-shielded computer screen, or by nosy co-workers who can’t seem to just get on with their own work.

We Work Best Where We Have Control

The simple truth is that people like having some control over their workspace. Every personality differs; some people are messy paper-nesters; others are neat-freaks. Some personalize their spaces, others like as little personal clutter as possible. Most of us, just want a space to stash some snacks and keep a few personal gadgets or tools, a space that lets us concentrate when we need to, or have a phone conversation without the entire office getting to listen in.

“The irony is that what might feel like a creative hubbub is, in fact, counter-productive to actually being creative,” said Hegarty. “Have a look at the environments and studios in which designers, writers or artists work. Generally, they’re quite controlled, quiet spaces within which the person can do their thing. People might want different things from their space to help them, some might work better with inspiration around them and music, others might prefer a quiet, blank space with no distractions. But we force everyone to work in this same creative call center environment. It’s difficult to see how the removal of creative spaces and offices for creative is having anything but a negative effect on the quality of work.”

Imagining the Workspace of the Future

If the old office cubicles nor the widely used open-plan design truly align with how we actually work today, what will future office space look like? As we move into the future, designers say we will increasingly adapt public space to accommodate workers moving from environment to environment based on the need of the moment… and workspace will reflect and mimic public spaces. Per Jay Osgerby of workspace design firm Barber & Osgerby: “The desk is dead,” said Osgerby. “I don’t even know if the office building as we know it today will be in existence.”

Other designers suggest that workspaces need to be improved with greater focus on human needs; a few suggest that co-working space will likely see a boom as businesses realize they can’t afford buildings or office spaces where the desks are empty—employees can and will work from anywhere. And co-working spaces are finding that workers will pay a premium to get private space. Furnishings will look more like living room seating, and tables, chairs, stools, sofas and other elements will be flexibly designed to allow pod-style, flexible units to be created, then quickly be changed to new configurations.

Other elements that will gain attention are acoustics, to deaden ambient noise; communal areas mixed with privacy booths; and a greater focus on actual work over amenities like ping-pong tables and game arcades.

Many public spaces will take on the appearance of workspace; many hotels and building atriums are seeing their spaces become on-the-go work stops for people who are having meetings, plugging in briefly to communicate with co-workers, or simply taking an hour to finish a document or presentation. Work will happen wherever we happen to be, as we need to do it. Businesses will have to adapt to employee needs as well as to financial demands to reduce overhead and meet client demands for greater flexibility.

As with other changes in how we work today, [read "Remote Control" in the Winter 2018 Second Wind Magazine] future workspace design will impact on smaller ad agencies’ ability to bond employees to the firm, and build creative reputation as a distinctive brand claim. If workers work everywhere but at your offices, how do you claim a uniqueness derived from your people and processes? Workspace that keeps people satisfied and engaged—and bonded to your firm—will become valuable tools in the battle to retain the best employees.

These challenges will need to be considered and addressed as we move into the undiscovered country of future work.