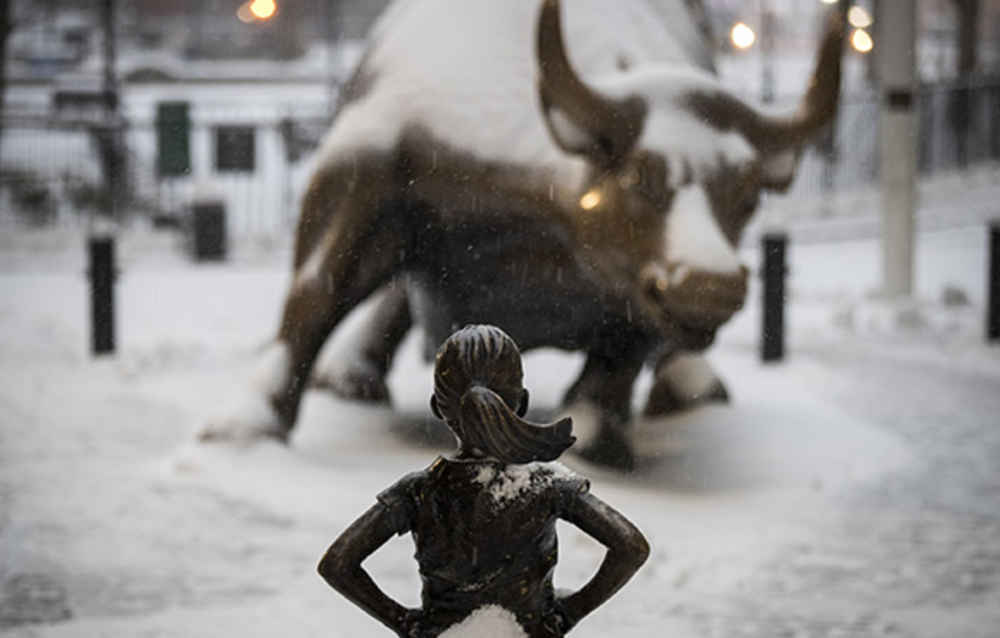 For anyone who’s been in the ad business for at least the past five years, the name “Fearless Girl” will doubtless be familiar.

“Fearless Girl” is a statue created by artist Karen Visbal for a guerrilla campaign that made headlines around the world and won 18 Cannes Lion Awards in 2017, including the Titanium: Grand Prix trophy. It also collected a Grand Effie for effectiveness. The client, State Street Global Advisors (SSGA), commissioned the statue to promote its Gender Diversity Index, or SHE Fund, which invests in women-led companies. The idea came from agency McCann New York’s creative duo, Tali Gumbiner and Lizzie Wilson.

The statue of a confident girl, hands on hips, was placed facing the famous Wall Street bronze bull in Bowling Green Park, and attracted media attention that quickly made global news. The creator of the bull sculpture, artist Arturo Di Modica, filed suit stating that the addition of the Fearless Girl altered the artistic intent of his own piece. While that litigation made its way through the courts, Fearless Girl remained a magnet for selfie-takers and media stories. The statue was supposed to be installed for one week, but the permits were extended through November 2018, when Fearless Girl was moved to a permanent position opposite the New York Stock Exchange.

The campaign’s viral fame boosted SSGA’s profile and created a storm of earned impressions for the firm. But with that fame came controversy.

State Street Global Advisors (SSGA) sued artist Kristen Visbal over rights to use replicas of the “Fearless Girl” statue. Visbal created replicas for the Women’s March in 2017, and for other entities in Europe. SSGA claims Visbal created the statue as a commission, and in partnership with their “third-party” partners, McCann New York (i.e., she was not the sole creator), and that she signed away her full copyright to the image and the name. Visbal disputes that she surrendered all rights, and that SSGA misled her about the rights transfer prior to her signing any agreements. The case is working its way through the District Court of the Southern District of New York.

There are echoes of the renowned Reid Decision (Community for Creative Non-Violence vs. Reid, 490 U.S. 730, 1989), in which artist James Earl Reid, and charity Community for Creative Non-Violence (CCNV) that commissioned a bronze sculpture from him, both filed for copyright of the work. The U.S. Supreme Court, in a decision led by Justice Thurgood Marshall, held that the work fell under the “work made for hire” rule, in which the artist was hired by the clients as an independent contractor to create the work; while the client directed some of the development of the artwork, the artist was deemed to hold the copyright based on the requirement for his specific set of skills, equipment and studio facilities; and on the short-term, contractual nature of the relationship, among other things. A large factor was that the contracts did not discuss copyright of the finished work, nor mention it as being a work-made-for-hire.

The work-for-hire standard became a key to understanding how ad agencies working as agency-of-record (de facto employees of their clients) differ from agencies that step in to execute projects more like independent contractors. It further found that copyright to works created under these different circumstances also differs, with independent contractors retaining copyright to all materials unless and until rights are transferred, in writing, to the client.

By the way, the U.S. Supreme Court this year held that only registered copyright holders can file for infringement suits—that’s registered, not “applied for.” Copyright registration could come into play in the Fearless Girl case.

SSGA commissioned the statue to promote its SHE Fund, but the success of the campaign followed by the litigation over copyright also resulted in State Street being called out for hypocrisy. The company’s internal policies and leadership do not reflect the diversity they claim to promote. Suing the female artist who created the statue for sharing the artwork with women’s causes has not improved negative perceptions of State Street.

It remains to be seen whether the parties will fight their way through the appeals courts, if the courts hold that the copyright transfers to SSGA, or that Visbal retains the copyright. A third possibility is an out-of-court settlement allowing the parties to share the copyright (as Reid and CCNV eventually did).

It’s just one more reminder to agencies and marketing firms to address copyright transfer and work-for-hire at the beginning of a project, so as to avoid disputes over ownership… and the possible break-up that tends to go along with such disputes. It’s also a heads up that viral fortunes can turn on a dime. Be careful out there…